Attention all Techniciansss: Hip-Hop Powerhouse TECH N9NE returns to Australia and New Zealand this November after selling out shows on past tours you can be assured the demand for tickets will be higher than ever. TECH returns to our shores for the first time since 2018 armed with his latest album Asin9ne and a selection of his best-known tracks. The announcement comes with a stern warning for fans: TECH is hungrier than ever before.

TECH N9NE’s career is at an all-time high with the release of his latest album Asin9ne. Asin9ne features the track ‘Face Off’ which blew up with huge commercial success with an appearance by ‘Dwayne ‘The Rock’ Johnson alongside King ISO and Joey Cool. ‘Face Off’ has clocked up over 111 million Spotify streams and 57 million YouTube views.

TECH N9NE’s live shows are not for the faint of heart. With the crowd hanging onto his every movement, TECH masterfully guides them through the evening of sonic chaos, feeding off the madness unleashing before his very eyes. His shows are a non-stop party from beginning to end. The atmosphere and energy at a TECH N9NE show is unlike anything else. No one puts on a show like TECH N9NE.

Special Guest is none other than Rising Rap Phenomenon, King Iso.

As the biggest selling Independent Hip-Hop artist of all time, TECH N9NE has had his music featured in film, television, and video games. Independent to the core, TECH N9NE is free to make music for himself and his fans and no one else. He appeases no masters other than the legions of Strange Music fans across the globe.

he independent underground would not be what it is today without pioneers like Strange Music cofounder TECH N9NE. Tech’s unparalleled tour schedule and signature rapid-fire “chopper” style combined with the business acumen of Strange Music CEO Travis O’Guin have molded Strange Music into the number one independent hip-hop label in the world. In less than two decades, Tech himself has earned three gold records, sold over two million albums, and made multiple appearances on Forbes’s “Hip-Hop Cash Kings” list. Tech’s multi-faceted skillset has not gone unrecognized by artists of all genres, exemplified by collaborations with such diverse artists as The Doors, Slipknot’s Corey Taylor, Eminem, and Boyz II Men, to name just a few. Everyone from Dwayne “The Rock” Johnson to Elton John has been spotted bumping Tech N9ne records, a testament to constant reinvention and inarguable excellence that has become standard of Tech’s work. It’s by no coincidence that his latest label-wide collaborative project was named Dominion – Tech N9ne will not stop until he and Strange Music.

“I’ve got a chip on my shoulder,” TECH N9NE says. “I’ve still got a lot to prove. That’s why I still rap so hard. I’m always trying to get better and better. I’m not softening it.” If you missed out last time, now is your chance to fix your mistake. If you were lucky enough to catch one of the shows, this is another opportunity to witness one of the greatest live shows in Hip-Hop. Bar none.

TICKETS ON SALE NOW FROM: https://metropolistouring.com/tech-n9ne/ 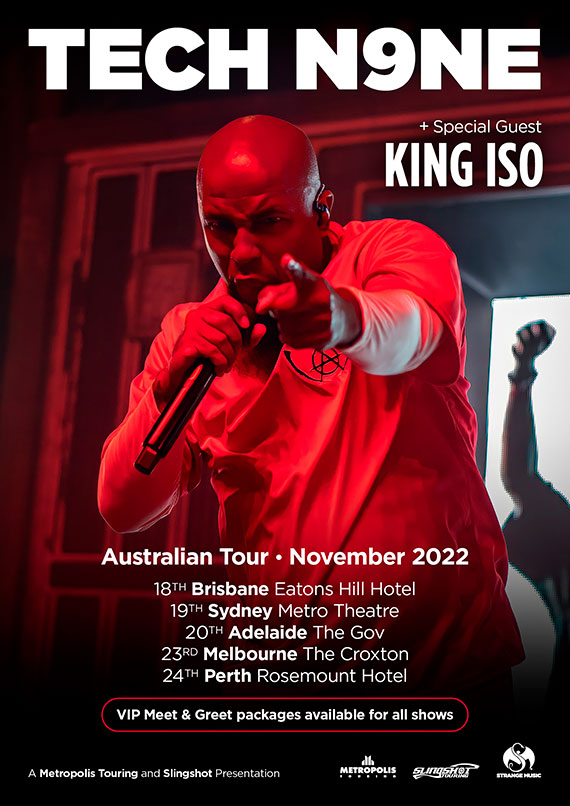