Australian metal pioneers Sunk Loto sold out both Queensland shows within 24 hours of announcing their return to the live stage. In addition to adding a second night in Brisbane, they plan to keep up the momentum in Sydney and Melbourne by announcing shows for later this year.

If you had to list the most important heavy Australian albums of all time, it’s likely that Sunk Loto’s 2003 release Between Birth and Death would be near the top, and metal aficionados still consider the band as one of the most influential home-grown bands of the early 2000s.

Signed to Sony in 1999 when the average age of the band members was 16, Sunk Loto released an EP and two albums over their 10-year history. They toured the world with bands like Korn, Linkin Park, Suicidal Tendencies, Perfect Circle, Deftones, Sevendust and staked their claim as an epic live band at festivals such as Big Day Out, Homebake, Vans Warped Tour, Splendour in The Grass, and Falls.

Now, after 15 years apart, Sunk Loto are geared up to announce a return to the stage with shows in Queensland this winter, before heading further south later this year. The shows will feature all four original members who have come together to reconnect with their fans, entertain, have fun, and reignite their love of playing music.

After “five years of silence” (times 3) in a live setting, definitely don’t miss the chance to catch Sunk Loto back at it when they finally return to a live setting near you. And with the previously announced two Queensland shows selling out in less than 24 hours, you can guarantee these new dates will go fast – don’t delay, snag your ticket today to one of the biggest shows of 2022!
Nobody Presents
SUNK LOTO
FIRST SHOWS IN 15 YEARS
WITH SPECIAL GUESTS 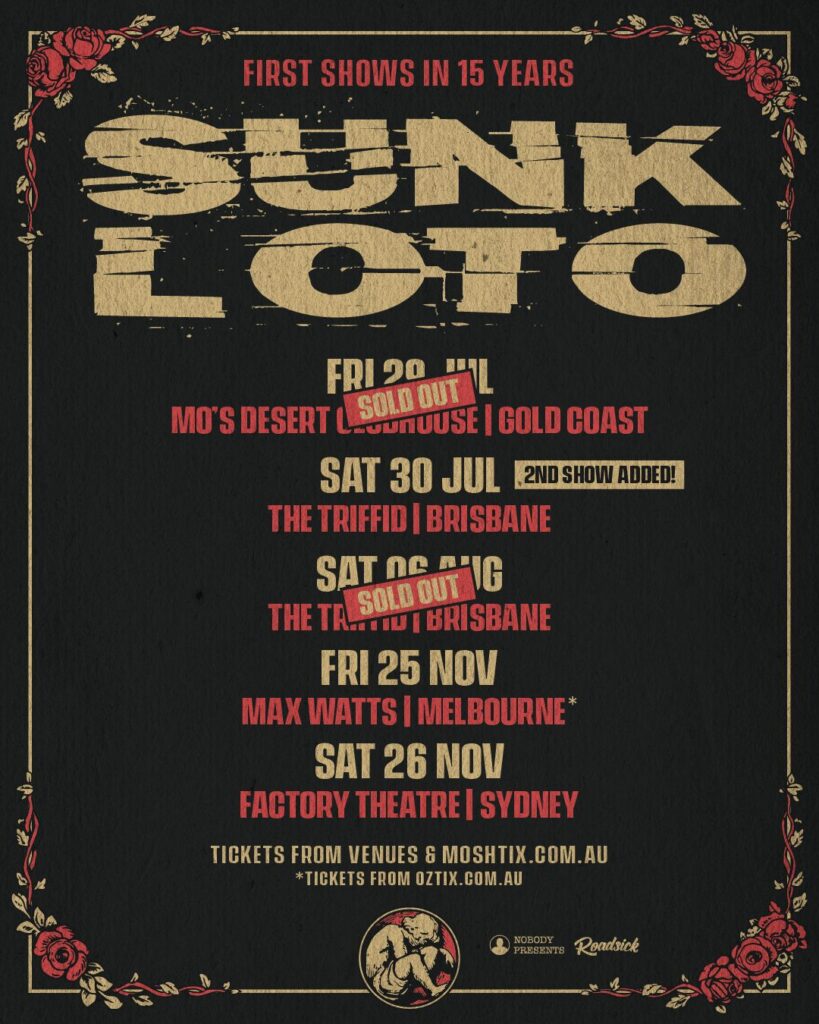