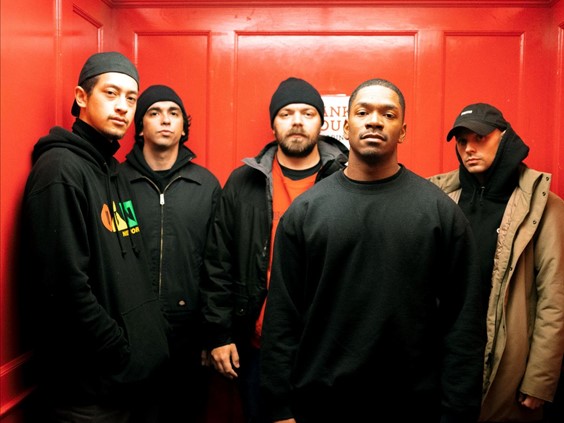 “VEIN.FM continually give me hope,” says Rickly. “They never stop pushing: pushing the limits of of their sound, pushing themselves to the edge of their physical abilities to make noise. On this album, they incorporate avant-garde elements, socially acute lyrics and wild soundscapes, without ever sacrificing the absolute brutality of their early songs. I’m so excited to be a part of this record — a record that will push us all forward.”

Previously, VEIN.FM shared the video for ‘The Killing Womb‘. Watch it here.
The band also did an exclusive interview with SPIN, detailing the new album. Read it here. The announcement released was heralded by Pitchfork, Stereogum, Brooklyn Vegan, Revolver, Loudwire, MetalSucks, and beyond — a further indication that This World Is Going to Ruin You is one of the most anticipated releases of 2022.

This World Is Going to Ruin You was recorded with Grammy-winning producer Will Putney of Graphic Nature Audio in April 2020, just weeks into a global shutdown. Featuring guest appearances from artists Geoff Rickly, Jeff Smith, and BONES, as well as the original artwork and typography of Autumn Morgan, This World Is Going to Ruin You is a fully-realized version of the band’s darker and more disgusting inception of metallic hardcore.

While the band’s full-length debut Errorzone received praise from Pitchfork, which stated that it “sets the tone for one of the year’s most exhilarating heavy records…” “This World Is Going to Ruin You” will be hailed as its own formidable beast. “Every release is like its own universe,” the band explains. “On ‘Errorzone’, we made a departure into another universe, sonically and visually. It was very futuristic and high-energy, and there were lots of elements we tapped into in order to fulfill our vision of that universe.” In that sense, This World Is Going to Ruin You is not a return to the band’s roots so much as a more fully realized version of them. “But it’s not a contrived nostalgia trip. We’re just naturally taking that part of the band to a fuller potential,” vocalist Anthony DiDio explains. “‘Errorzone’ was entering another world, while this record is VEIN.FM coming home.”

Lyrically, “This World Is Going to Ruin You” describes the human condition through a birth-to-death timeline. “I was coming from a very anti-social mentality,” DiDio says. “I want people to completely disconnect and have their own personal journey through this album.”