Mass Sky Raid, South East Queensland’s favourite sons of progressive music, are returning to the fray of the Australian music scene today with arrival of their new single ‘Arrows’ and comes with a scenic film clip shot my Ten of Swords Media!

All details on how to purchase and stream the single can be found at massskyraid.com.Not only that, they are celebrating with some sweet, sweet live shows to back it up! Friday 9th July sees them play hometown Gold Coast at Mo’s Desert Clubhouse, and supporting prog metal legends The Stranger at Woolly Mammoth on the 20th August! Details and Tickets are all available at massskyraid.com.As for the new single, the band say that it is “…sonically progressive, crossing genres and exploring both the heavier and more ambient lighter side of our sound. We think that Arrows gives the listener a journey – both vocally and musically – moving from anthemic heavier riff-driven moments to subtle open musical space, which compliments the lyrical journey of discovery and the struggle within the search to find meaning.”Mass Sky Raid formed in 2011 and released their debut EP ‘Courage Under Fire’ mid 2013 – and set about securing support slots with Dead Letter Circus, Twelve Foot Ninja, UK exports I Am Giant and more. They followed that up with their first full length album “Science of Fiction“, which garnered love from rock radio including triple J, Triple M, Rebel FM, Andrew Haug Radio, The Faction, 4ZZZ and 2FBi, in addition to over 40 stations worldwide. Their single “Closer” was also featured in Jane Gazzo’s top 30 of Triple M Home Grown tracks in 2017.The band have consistently worked in collaboration with talented local Gold Coast producer Luke Palmer, and this new single and further releases to happen in 2021 are no exception.Expect more from Mass Sky Raid this year – in the meantime, Arrows will be released into the world on all digital stores and streaming platforms on Friday July 2. All details at massskyraid.com. 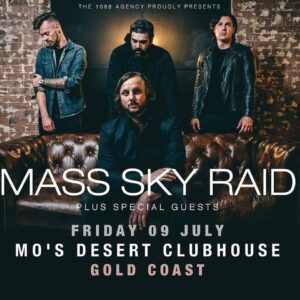